Crenshaw, also known popularly as The 'Shaw, derives its name from Crenshaw Boulevard, which is among the major thoroughfares in the city.

Geographically, it is bounded in the south by the Baldwin Hills, in the west by Baldwin Village, and in the east by Leimert Park. 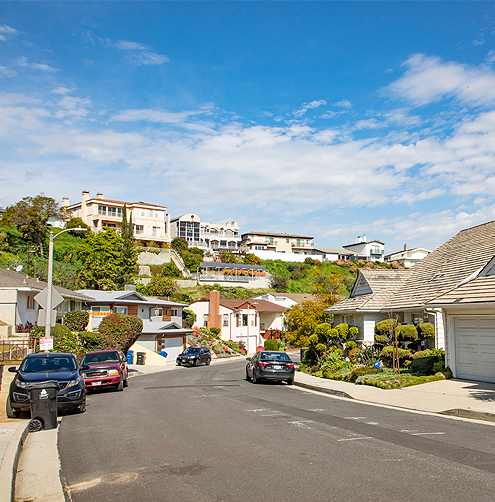 There are many commercial buildings in Crenshaw, mainly lining the industrial corridor that runs along Jefferson Boulevard, as well as quite a few other commercial districts. According to the 2006 U.S. census, Crenshaw’s population was about 27,600. The Median household income was $53,326, which is higher than LA, and 4% lower than in California. The income per capita is 6% over the national average.

The Crenshaw District is primarily residential, and contains a number of single-story houses, apartments, low-rise condos, and bungalows. Crenshaw Boulevard was the site of a fatal crash, following which members of the community collected $2 million to improve the safety setup along it, from 79th street to Florence Avenue. The development here includes flashing new crosswalks and flashing warning beacons on them, median islands, and concrete curb extensions. This boulevard has since reinforced its position as the commercial spine of what has popularly and graciously come to be known as “Black L.A.”.

Crenshaw Boulevard received its name from real estate developer and banker George Lafayette Crenshaw. Architecture critic Christopher Hawthorne once remarked that the boulevard “begins and ends in wealth”, alluding to the fact that it stretched all the way from its terminus on a Palos Verdes cliff, to Hancock Park. The establishment of Ralph’s grocers in the year 1942, and then that of Broadway Crenshaw Plaza, changed this street into the thriving commercial corridor it is today.

If you have a home in this area that needs remodeling work or could benefit from it, Trig Builders are the firm to turn to. Our remodeling work features the application of hard-won expertise in locating and addressing even the most minor issues and concerns, and we always make sure our customers are satisfied as well as impressed.